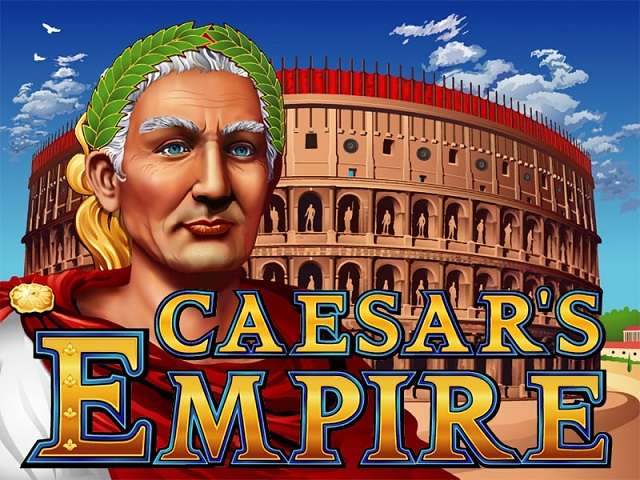 The Caesar’s Empire slot by Realtime Gaming or RTG is a historically-themed video game introduced to the casinos online market in 2005. The slot is still popular for its simplicity in the bet rules and wins features. The historic theme takes the players back to the golden time of the Roman Empire, the reign of the greatest and the most admired emperor of that time, Julius Caesar. The game symbols represent that historic era, the Coliseum in the background of the reels, and several intense coloured symbols being used to portray the essence of Caesar’s historical timeline. Every win is greeted with specific sound and graphical effects.

The layout in Caesar’s Empire game comes with a 5-reel and 3-row format giving room for 20 adjustable paylines to bet and win. The game controls are as follows;

The minimum possible bet can be set at 0.01 per payline, but with all 20 active paylines, the maximum bet can be 100, when the coin value will be 5.0 bet per play line.

Caesar’s Empire has 4 themed symbols which are Queen Cleopatra, Centurion’s Helmet, Sword and Shield, and Fruit Bowl and 6 card icons from ‘A’ to ‘9’ making winning combinations with the wild symbol represented by ‘Caesar’s Gold coin’  and ‘Coliseum’ as the scatter.

3-5 same card icons when landed on the reels from left to right on an active payline give a payout ranging from 5 to 125.

The themed characters will pay from 2 to 2,500 for 2 to 5 same icons landed on reels from left to right on an active payline.

The gold coin appears on the 1st to 4th reels in a base game round. It is the highest valued prime character symbol. It acts as the wild symbol to substitute for all the symbols except the scatter. Also, it acts as a 3× multiplier as triples a winning amount. Besides, it triggers the bonus round of free spins.

2 to 4 of such symbols on the reels from left to right on an active payline have a winning payout ranging from 2 to 2,500.

A Queen Cleopatra and gold coin combination of 5 such icons on an active payline from left to right awards the highest single payline winning payout, or the game jackpot, of 1,875 in real money when playing Caesar’s Empire slot machine online for real money.

Wild & Scatter to Win in the Bonus Round

One or more wilds on the reels and the scatter symbol appearing on the 5th reel initiate a bonus round in Caesar’s Empire game. The features are listed below:

A progressive jackpot is triggered randomly and can be won at the end of any game. Its wins are added to other wins.

To play the Caesar’s Empire free demo version is the basic tip for new players. Due to this free game version, they can understand the rules and fundamentals of this slot machine and come up with their strategy for a big win before starting gambling.

Caesar’s Empire casino slot online is no doubt one of the best easy to play and win slot video game for all players out there allowing no cheats. It has high volatility, the RTP of 97%, and an Australia slot rank of 842 what encourages all the gamblers to try this amazing gaming option.

Treasures Of The Py