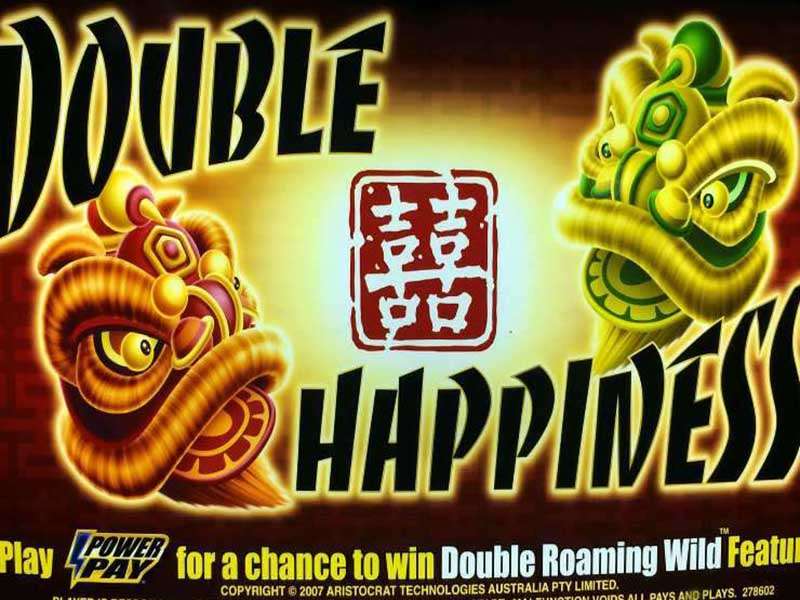 We have already seen some slot machines themed on Chinese history. Sometimes, the players get confused about which one is the best to play. But there is one thing is for sure – if someone is looking for a simple and straightforward Chinese themed slot machine, he or she should give Double Happiness a try. Coming from the renowned online casino developer Aristocrat, the game sure created quite the hype among the slot enthusiasts all over the world, especially in Australia.

Double Happiness game has quite some tricks under its sleeve to make players get hooked with this game in no time. Well. Stunning graphics might not be the most robust suite of Double Happiness. But we could talk about a lot of features that might make the players intrigued. We were quite fascinated with the way Aristocrat brought the Chinese history in front of us and did justice to the smaller details. Moreover, the 75,000 coins as the jackpot amount don’t sound that bad as the highest payout.

A Touch of Tradition!

The colour red has a special meaning in Chinese history. The tradition favours the colours to be the bringer of luck and good fortune. Maybe that’s why red is also the prominent colour of the game. We see the presence of the colour in every nook and cranny. For example, the backdrop is coloured red. Also, we see the presence of this colour in the symbols. One of the two dragons is painted red which is the most potent symbol of the Double Happiness.

The Basics You Should Know

In a word, you could define the slot machine to be a video slot having 25 selectable play lines or pay lines. There are five reels and three lines – looks like Aristocrat tried to keep things regular like most other slots available on the casinos online. Although, the highest win is awarded as per the pay lines and pay table.

Now let’s take a moment and talk about the symbols, shall we? All of the symbols represent the spiritual Chinese tradition and history. You can find the Chinese man holding the traditional Chinese hand fan which is the highest paying symbol after the wild yellow dragon, a drum set with two sticks, traditional Chinese firecrackers, a yellow lamp, a pair of golden cymbals, and the royal symbols. Although, the ace and the king royal symbol has the same value here. Similarly, the queen and the jack have the same value, so have the 9s and the 10s.

Who Doesn’t Want a Little Bonus?

So this was all about the payable symbols of the game. Now let’s take your attention to the bonus features of Double Happiness slot – we know you all have been waiting to hear about them!

Okay, first we are going to talk about the wild and the scatter symbols of the game. The dragon symbol is the wild of the game. This information is often displayed on the game display above the reels.

Well, let’s make things clear, there are two dragons in the game – the yellow and the red dragon. The yellow dragon is the regular wild which can substitute all the other symbols, but the scatters. The red dragon opens the gate of Double Roaming Wild™.

The Double Roaming Wilds™ (two red dragons) can appear on any reel. If by any chance both of them appear in the same position, the winning amount is multiplied by 10! To have a better idea you must play Double happiness slot machine online.

Aristocrat is famous for their gambling features. Double Happiness free game is not an exception here. In the gamble round, you will have to guess the colour and the suit of a card. The correct colour guess doubles the win, while the two correct answers quadruple the win amount.

The serious players can play Double Happiness for real money. So, without any doubt, we would recommend the game for you and tell you to spin a few rounds if you have a thing for the slot machines.