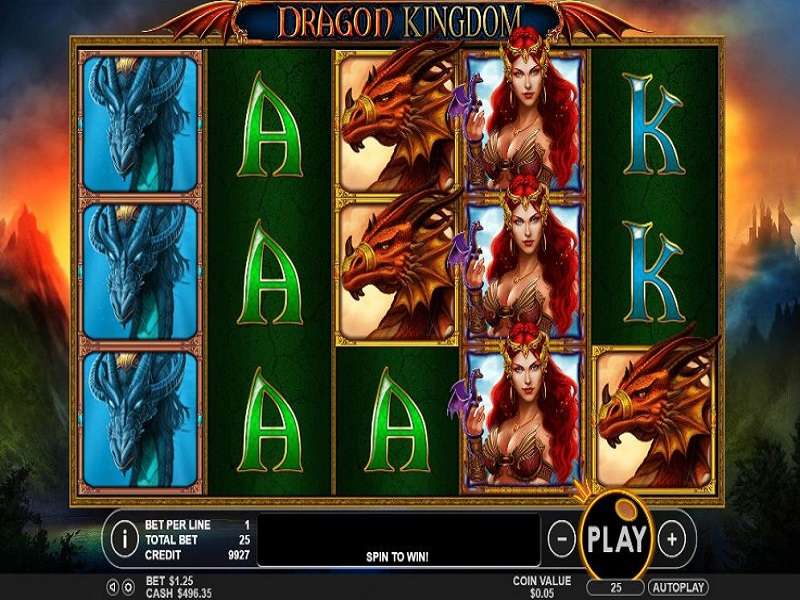 This game from Pragmatic Play is an animal themed game which introduces gamers to the now extinct dragons. For those that have not seen a dragon before, worry not, as this game introduces you to all kinds of the fierce fire spitting animals.

This is to say players from America, Europe, Asia, Australia and Africa are all able to spin the reels as long as online gambling is legal in their jurisdiction.

This review of Dragon Kingdom game includes game playing as well as game-winning tips and strategy. The RTP stands at 96.47 per cent.;

How to Enter the Area of the Fire Spitting Dragons?

It may sound too scary to enter into a kingdom that’s full of fire-spitting dragons but do not be scared as their fire is not meant for you.

Entering the Kingdom in Demo Mode

Playing Dragon Kingdom casino slot online for free is pretty easy. The first way of doing this is by simply hitting the Spin button after loading the slot. When you do this, it means you play with the default settings in place, nothing much to worry about as you are using free credits after all.

However, if you want a bit of control over the game, you do have the freedom to alter some few things on the Control Panel. Firstly, there is the Quick Spin button. This button allows the player to spin the reels at a much faster speed.

Besides entering the play using free credits, gamblers can also enter the kingdom using their own funds. The beauty of using your own funds to enter the kingdom is that any rewards that you get while inside will enable you to claim and withdraw your winnings in real money.

When you opt to play the Dragon Kingdom for real money, you need to consider the betting ranges allowed so as to manage your bankroll properly.

The Rules of the Game

Winning combinations in Dragon Kingdom slot originate only from the leftmost reel. Also, when you encounter connectivity problems or the game has a malfunction, it voids all plays and pays. This essentially means you have to start your spin afresh.

The shining gate written FREE SPINS acts as the Scatter. There is no bonus symbol in the Dragon Kingdom casino slot online as well as a jackpot.

There is no limit to the number of free spins the player is awarded, as long as the player keeps landing three or more Scatter during this feature, he will keep on retriggering more free spins.

Before starting the free spins round, the gamer is asked to choose one symbol out of five that he wants as a stacked Wild.

The Dragon Kingdom is a high volatile slot which has tendencies of spitting out some excellent rewards from time to time. Gamers can enjoy this slot when playing on the desktop or on mobile devices.

Pixies Of The Fores