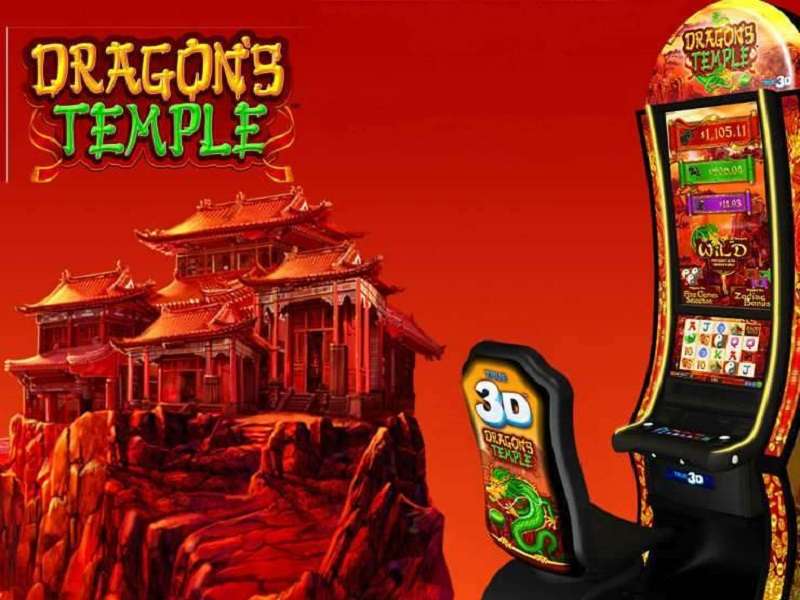 Tired of Oriental and Chinese in slots? Then you’d better beat the boredom down for the sake of an amazing game by IGT, which truly rolls Asian refrains off the beaten path. We all know how much dragons mean for Chinese culture and mythology – they protect, spread luck and prosperity all the way around, magnet positiveness, put off hardships. Well, barely is there anything these mysterious creatures cannot reach out. IGT were apparently so inspired by the power exerting from dragons, that they brought to gambling light a narrative about Dragon’s Temple – a place where five almighty fire-breathers abide.

Dragon’s Temple is a highly entertaining and rewarding machine because IGT did not mess around the gameplay adding fruitless nonsense – everything is strict and cohesive, two prize-styled rewards are waiting for casino players on the reels, each having a lavish capacity. From one side of the coin, there is an opportunity to befriend a whole package of mythological dragons. Five creatures each has an allocated Wildcard, landing on its own prescribed reel. On the other side, there are freespins with a selection within, meaning Dragon’s Temple will not stick you to something single. Instead, punters are always given the choice which matters.

Also, it would be a crime not to appraise visual interpretation inside Dragon’s Temple slot machine. First off, the game utilizes all the classic graphic elements intrinsic to Chinese-based layouts, and you have probably already come to even recognize them. 3D feel of Dragon’s Temple’s graphics, scattering golden and red ornaments, genuinely creates a beautiful gaming environment so that you could find yourself get lost into it all.

Four-to-five – slightly off classics 5×4 gaming grid, meaning Dragon’s Temple consists of five reels and four rows respectively, opens a field of 50 different paylines to be wagered on. Lines, though, with all this abundance in action, cannot be properly fixed which, in turn, significantly affects the in-game stakes. Line bets starting at 1 credit is a serious issue for a low-roller, but at the same time mid and large bankrolls are welcomed.

Wild Dragons – next up, coloured dragons. On the layout, there are five various Wild Dragon symbols, with a different dragon for each reel. Needless to say that this colourful diversity makes Dragon’s Temple slots really special – if you are lucky to catch them all at a time, this will be a reeling holiday, for sure. Besides, Wildcards here are not that traditional as it might seem at first. Dragon’s Temple provides an expanding function: when a Wildcard completes a winning combo, it expands over the whole strip.

Scatters – they pay, they trigger. Yin Yang Scatter symbols in Dragon’s Temple are incredibly powerful participants since these icons are able to activate freespins selection bonus and also fetch prize, even if there are not enough symbols on the reels to jump to the bonus. Speaking of the free games, Dragon’s Temple offers a triple selection to choose from – some definite number of rounds and an extension in the form of Wilds. One option, for example, sets three reels with Expanding Wild, but gamblers get only 5 spins, which is, of course, reasonable.

Dragon’s Temple slot is a game with 50 win-lines, and not only could it perplex novices, but also arise a question: how do I play a multi-lined game? Actually, there’s a huge distance between modern classics of 15-20 lines and 40+ multi-environment simply because the latter involves larger bets and higher risks. If you do not want to lose it all at casinos, you’d better keep in mind several useful tricks:

The Yin Yang symbols generate freespins as well as an instant cash win for matching. These in-game icons appear only on reels 2, 3 or 4. In order to get cashed, two symbols will do. In order to activate the freegame mode, you will need three-of-a-kind on the positions. In either case Dragon’s Temple slots game pays out.  As soon as three Scatters are collected, the game gives a choice:

You cannot cancel your selection once it is made. Also, rounds cannot be retriggered by another set of Scatters as they are excluded from the regime. It is recommended to go for the last two selectable options because most generous combination are there.

Dragon’s Temple incorporates a 5×4 gaming format with 50 partially fixable win-lines – players can adjust the number by 10s. The machine has sick bet levels that not even every high-roller would be able to live through: 1 credit stands for the smallest bet whereas the highest to go is 250 (!) credits. Simply multiply the last value by 50 to understand how much you can actually wager in Dragon’s Temple.

Your mid-term objective is to catch bonuses and the prior one is to complete combinations with symbols. Expanding Wildcards will come to help you out in this along with Scatters which will be activating freespins. The paytable includes five card characters, three mid-win pictures, two high-win ones, five Wildcards and a Scatter. Overall, each symbol in Dragon’s Temple pays.

Options are everywhere, and this comes as the biggest advantage to Dragon’s Temple by IGT. Stakes allow tremendous winning combinations, but to some extent it all looks more like a rip-off. Though, gamblers can stick to 50 credits per spin, but for how long would bankroll survive through this extreme wagering?