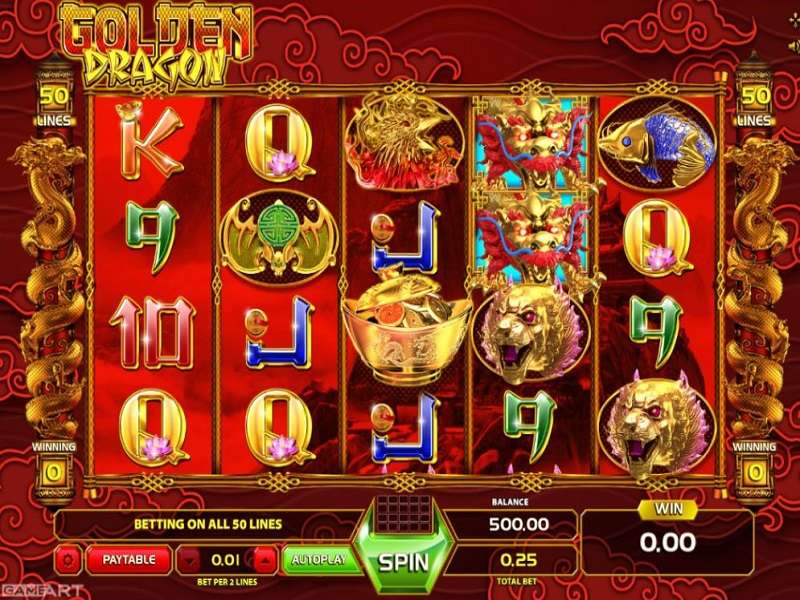 The Chinese culture is an interesting one; it is no wonder that there are a number of games based on it. Golden Dragon by GameArt is just one such game.

The gorgeous graphics and design are as vibrant as what the culture holds. It transports players to the gorgeous emperor’s palace and boosts of a number of vibrant symbols that depict the beautiful and extraordinary Chinese culture.

Golden Dragon slot features the Emperor’s palace in a 5×4 grid format. There are 50 lines of pay to work with in addition to a number of useful features. Available features include the Golden Dragon and the free spins feature.

Unfortunately, there is no bonus round. Fortunately, however, there is a re-triggering effect in the free spins round. The Golden Dragon game is a low volatile one in nature.

Available symbols include the standard playing cards ranging from 9 to the Ace, the bat-like animal, the koi fish, the bird’s head, a gold lion’s head, the golden dragon.

How to Spin the Golden Dragon Free?

Understanding what the different symbols carry will help you as you spin Golden Dragon casino slot online. The playing cards as is the case with most slots carry the lowest value. With them in place, you are in for a win of 25-37.50 coins. These values are valid for a 5x symbol combination.

High paying symbols include the gold lion’s head, the golden dragon, the bat-like animal, the bird’s head and the koi fish. Their presence translates to a 75-500-coin win for the player for a 5x symbol combinations.

The most valuable symbol of the lot, however, is the golden dragon. With it in place, you can look forward to enjoying a total of 500 coins! As if that is not enough, it also acts as the Wild thereby having the potential to replace all other symbols in the reels in order to form a winning combination.

The above-mentioned statistics are pretty cool if you choose to play Golden Dragon for real money. The other important symbol is the gold bowl that acts as the Scatter. With its presence, you can look forward to unlocking the free spins round. In order for this to happen, you will need to land on at least three gold bowls.

Their appearance must be in a single spin on any part of the reels. If you manage to unlock more than three Scatters, then you will potentially have prolonged your gameplay. Scatters have the potential of awarding you 4x your wager.

How to Make the Most of the Game?

Two special symbols will help make the slot profitable for any player. These symbols are the Wild and the Scatter, as already explained above. Besides these two symbols is the free spins feature that helps improve your winning potential.

In order to arrive at the Free Spins feature, you would need to unlock at least Scatters on your reels. If you manage to unlock this feature, then you will be awarded five free spins, which spins have the potential of being re-triggered.

This amazing slot machine taps into the beautifully vibrant Chinese Culture. This 50 payline slot boosts of a 5×4 grid with plenty of rewarding potentials.

Useful symbols as with most slots include the Wild and the symbol. Besides these two are a number of other vibrant symbols that tap into the Chinese culture such as the koi fish and the golden dragon.

Unfortunately, there is no bonus round to speak of. However, the presences of the free spins feature more than makes up for this fact thanks to its re-triggering capability.

All in all, when you choose to play Golden Dragon slot machine online, you will find that it is an impressive slot that explores the gorgeous palace of the Emperor. It has plenty of rewarding potentials and is suitable for both beginners and experts. It is low-medium volatile in nature.