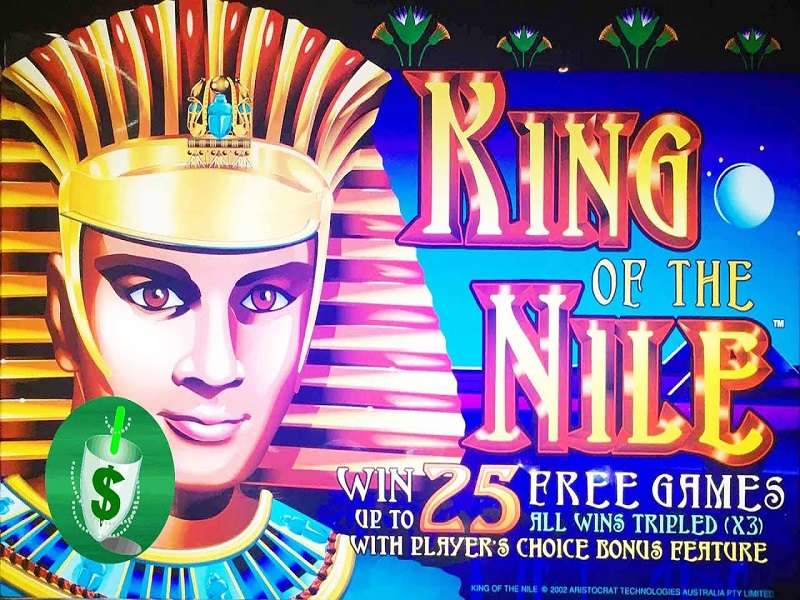 King of the Nile GAME DETAILS

The King of the Nile slot was developed in 2002. The slot manufacturer Aristocrat made it in its usual style: a slot for five reels and twenty lines. If you want to play King of the Nile for real money, we have bad news: it is available only in casinos. However, you may try the slot fun version. Install the free app “Heart of Vegas,” where all the Vegas slots are open to play. The app can be installed on any device on Android or iOS.

It doesn’t matter if you prefer playing for money or for fun – this review will be useful for you. After reading it, you will find out the game’s main features, which can help you to create your own winning strategy.

How to start the game

The first thing you need to do before you play King of the Nile slot machine online is to set the amount of the bet. It starts from $0.02 for every playline you want to include in the game. We recommend playing all the 20 lines to increase chance to win. The maximum bet in the King of the Nile is 120 credits.

Even though the bets are not too big, it is easy to win a huge payout because of the bonuses, special symbols, and a bet multiplier. The RTP in the game is 94%, and that is quite high comparing to other slots.

The symbols in the King of the Nile slot include high card values like 9s, 10s, Jacks, Kings, Queens, Aces, and specials. The specials are represented by Egyptian items: rings, pharaohs, scarabs, hieroglyphs, and even Cleopatra. The symbols support the slot’s theme of Ancient Egypt.

The wild symbol in the King of the Nile is a pharaoh. It substitutes any symbol to create a winning combination. If a player has two or more combinations created with the pharaoh, only the highest win scores. A pleasant peculiarity of the wild is that any win with the pharaoh doubles the prize.

The scattered symbol is the pyramid. Collect 3-5 pyramids to get 15, 20 or 25 free games. If you get into the free spins, all the wins during them will be multiplied by 3. Read more details about the King of the Nile’s bonus rounds below.

How to win the biggest payouts in bonus rounds

The King of the Nile casino slot online stands out from many online and offline slots. The main reason is the unique bonus system of the game. First of all, the number of free spins in the King of the Nile is greater than in other slots. You may win up to 25 bonus spins if you collect five scatters at the same time. Moreover, multiplied wins during the free spins let you earn more.

However, that is not all. The bonus round is impressive because it offers a player a choice. As soon as the free game is over, the player may choose to:

This option is available after the first free game and may be played only once per a bonus-free game feature. Credits and lines played are the same as the game started the feature.

The main tip in the King of the Nile for the beginners is to install the app and try the free version before betting real money in a casino. That allows you to check if the gameplay suits you. In addition, you will learn all the combinations, special symbols, and their functions.

For those who know the game, there is one cheat you might ignore before. After the end of a free game, when it is time to choose the bonus, do not decide to take the money. As a rule, the re-playing of the King of the Nile free feature pays out much more money. The prize may also be rewarding, but it is quite risky to choose, as you may win less money than you had.

Our verdict to the King of the Nile Game

The King of the Nile is a great slot, which nonetheless has one huge disadvantage: the absence of a real money online version. Nevertheless, you still may enjoy it by playing its fun version, because of the engaging and smooth gameplay and bonuses, which boost your earnings.

Quick Facts of King of the Nile