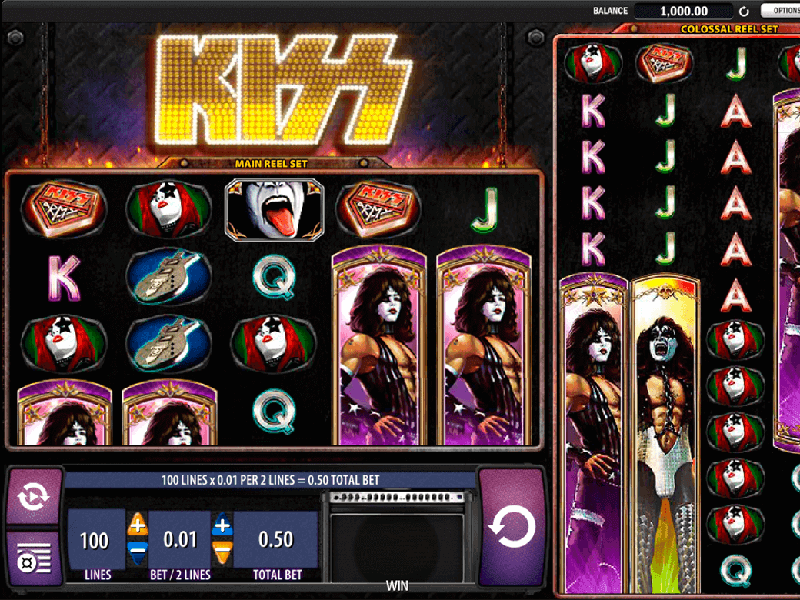 WMS brings back the rock-hard excitement of the legendary kiss band in the form of a slot called Kiss. The game is a well-deserved tribute to the famous band that rocked the hearts of their fans for quite a long time. The band was originally formed in the early 70s with none other than Gene Simmons leading it. They were famous in America and Australia. The band set new trends in the industry with their costumes and hard-rock performances, and their live stage performances and stage appearance are the main things that will keep their names alive in the rock industry forever. The Kiss slot lets you relive the amazing moments of your youth, or if you never heard about them, then you will surely enjoy their performance while playing the slot

Kiss game offers a unique reels presentation with not one but two sets of reels which are separated and are not linked together in any way. On the left side is the standard 5 reels setup and the second one as the WMS called it is the Colossal Reels set that also contains 5 reels, but the number of rows is 12. Both the sets of reels combine to provide players with 100 paylines.

Kiss casino slot online offers a dark theme representing the nights of the Kiss’s live performances with the rock band’s logo at the top of the reels lighten up in the golden colour. The soundtrack of the slot obviously features the rock numbers from the band that keeps you entertained throughout the game. With fair bits of animations and exciting soundtrack this slot really gives you a good time while spinning up the reels.

How to Play and Win

The controls offered by the game are pretty simple and very easy to handle so if you are about to play Kiss slot machine online for the first time, it won’t take long to be an expert. Before starting the spins you should select the stakes at which you want to play. For this game, the stakes range from a minimum of 0.02 to a maximum of 250 coins making it a good option for both the new and experienced gamblers. After selecting the stakes just click on the “SPIN” button and let the game do its work. Or, click on the Autoplay option to keep the reels spinning for a preselected number of times.

The standard way to win the amounts while playing this amusement is by landing the identical symbols on a single active payline.

In the paytable, the game offers a band’s badge, a guitar, a famous tongue of Gene Simmons, and a red-headed band member. Also, there are low-paying symbols including Ace, King, Queen, and Jacque.

Like most of the games, this game also holds the two special symbols a Wild symbol and a Bonus symbol. In this gambling option, the wild is represented by the all 4 members with the Band’s logo in front of them, that substitute other symbols on the play lines to produce win combinations excluding the bonus symbol, that is represented by the Band’s logo which helps players initiate the free spin round.

The first one of all tips is to try the Kiss’s free version to know the rules of the game, and after that, you can play Kiss for real money at any of the casinos online. See both reels sets as a single unit and plan your strategy accordingly to play with all 100 paylines. Do not get confused as after some spins, it will make sense. The last tip is to choose an online casino very carefully and beware of cheats and scams.

The game seems a bit confusing at the start, but with some spins, everything starts making sense and once it becomes clear there is nothing to stop you from winning huge amounts of money. The game is highly anticipated and pays out huge amounts as states its RTP which stands at 96% even without any of the jackpots.