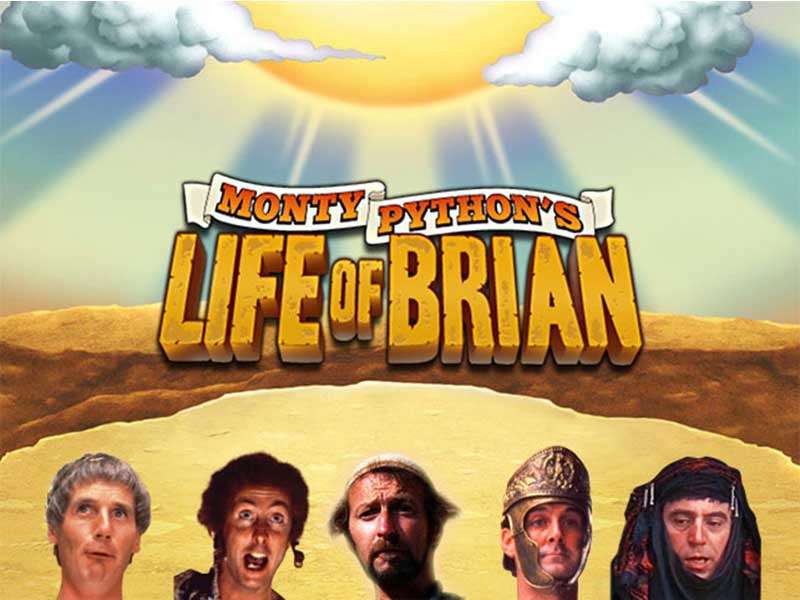 Based on the cutting-edge comedy film released at the end of the ’70s, the video slot game Life of Brian by Ash Gaming, now a subsidiary to Playtech, was released in 2013 as a desktop version enjoyed at casinos online. The mobile version was released in 2015. Ten decently designed bonus features relating to the most significant events of the storyline are offered. They are lucrative enough to reward players with great fortunes. The slot also offers a progressive jackpot.

Life of Brian slot provides 30 fixed play lines on 5 reels and 3 rows. The reels spin the main characters of the famous film being here the themed symbols − Brian’s Mum, Mr Cheeky, Centurion, Pontius, Brian, and the Jailer with 4 card characters (‘A’, ‘K’, ‘Q’, & ‘J’). Bets vary from 0.30 as the min one to the max of 300 as per coin value (0.01 to 10), and 30 coins as the fixed bet providing 1 coin bet per payline. The mobile version allows higher bets of up to 1,000 credits. There is no autoplay button in the desktop version as the feature has not been provided.

Landing the bonus symbols on the odd-numbered reels (the 1st, 3rd, and 5th) triggers 4 mega bonus games. A spinning wheel containing four bonus offerings with several multiplier values and cash prize rewards is set in motion to decide which bonus game is to be rewarded with either any respective multiplier value to be applied or any cash reward to be added to the winnings. Relevant features of the 4 bonuses in Life of Brian casino slot online are stated below.

One of the three following mini bonus games may get triggered randomly in Life of Brian game.

The free spins symbols landing on the 3rd, 4th, and 5th reels trigger the feature. Players select the squad members which will reveal the number of bonus free spins. Every free spin with a no-win result will increment the multiplier value (default 1×) by 1. Every successive win will be subjected to the current multiplier value. Collecting 3 crucifixion scatter symbols during free spins will activate the respective bonus game at the end of the free spins feature.

The crucifixion scatter symbols in this slot game can be collected only during the free spin game, and a collection of 3 of them triggers the crucifixion bonus game. Players are offered to select one out of 6 crucified symbols to reveal any one of the offerings as follows.

During the base gameplay, if the ‘Brian’ symbol falls off the reels, an alien spaceship will appear to catch him and trigger the respin feature. While Brian is falling off the reel, the affected symbols turn into wilds. Some more random symbols are shot to be turned into wild. The reels respin for further evaluation and rewards if any win happens. No win on evaluation will retrigger the respin and ends only in a win.

Life of Brian slot at online casinos in Australia shows medium volatility with a high RTP of 94%.  The tips to win are to place bets at low coin-values until you get accustomed to enormous bonus-featured offerings. It will be a good idea to try the Life of Brian free version to create your winning strategy. there are no cheats you can use, just play Life of Brian slot machine online according to the rules to win.

All of the 10 featured bonus offerings are designed to be exotic enough to provide similar fun and entertainment as the classic comedy did. Play Life of Brian for real money at casinos online and get a chance to to make an enormous fortune.