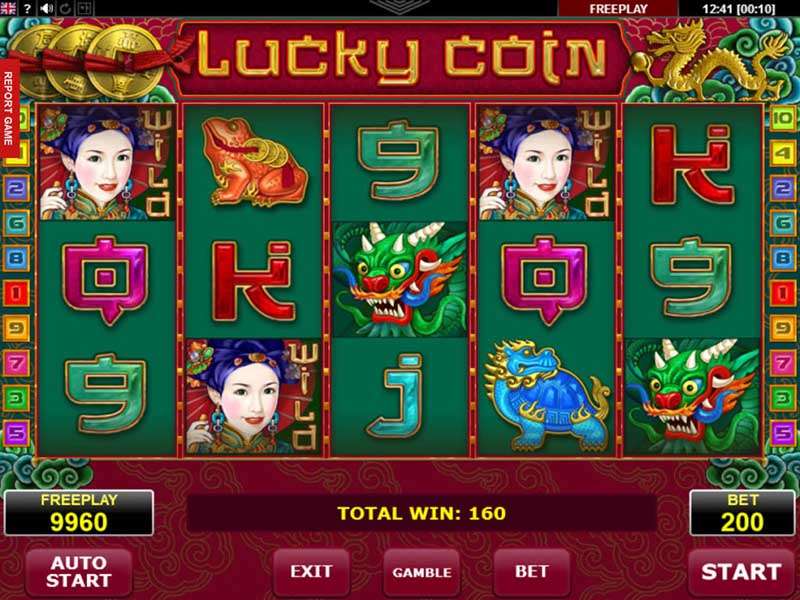 If you have always wished to be part of ancient China’s quest for treasure, then Lucky Coin will make your dreams come true. This casino online game by Amatic slot developers was created to celebrate ancient China. It is based on a Chinese coin which is regarded to be a symbol of good luck in many cultures. This slot has 10 paylines, and 5 reels and the background plays a soothing Asian music which makes it ideal for relaxation and pleasure. Players can widely find this casino game at Bitcoin casinos.

Technically, the design of Lucky Coin casino slot online machine is top notch. There is a top panel where you find the help menu, adjust to full-screen mode, sound volume and also the language. That is also where you get a paytable which explains the various icons and rules of the game. More lucrative symbols are based on the ancient Chinese culture like the dragon, flower, koi fish and frog. Frogs and koi fish will pay as much as 25,000 coins. The green dragon can award the player with a prize of 75,000coins.  Icons which pay less money are represented by 9, 10, j, Q, K, and A playing cards. This icon will pay you up to 12,500 coins.

Before you begin to play Lucky Coin for real money, place your desired bets. The stake per line ranges from 1 coin to 100 coins. This means that the player can wager with as low as 10 coins and as much as 1000 coins for a single spin. Click on the ‘Start’ button to begin spinning the reels and the ‘Stop’ toggle to stop them. Run the reels for your desired number of times without been interrupted by pressing the autoplay button.

Lucky Coin free game does not have several mini and bonus games, but other features will compensate for that. The following features make the slot more exciting and profitable:

The wild and the scatter icons are the bonus deals in this slot machine. They play the following roles:

This bonus round is triggered by landing three, four or five golden coins on the reels. The player will be moved to another screen having a gold backdrop and some music in the background. The Asian beats used in the bonus round are fast passed making it more unique. The 15 free spins come along with x3 multiplier. Payouts got during the free spins will be multiplied by three which enables the player to get incredible rewards during the feature.

The gamble feature unlocks after the player gets whir first win. This feature in Lucky Coin slot gives the player a chance to either quadruple or double their wins. If the player wants to double their wins, they will be asked to predict the colour of a playing card, and if they get it right, their payout will be doubled. One may also choose to predict a playing card’s suit will be spades, hearts, diamonds or clubs. Getting this right will multiply their payouts by four. The player will lose all their wins when their prediction turns out wrong. One is given a maximum of 8 chances to gamble per spin. This feature will help you to boost your small wins.

This slot is made with simplified graphics and designs. The simplicity of the game is what makes it admirable. Its aim is to deliver an entertaining yet serene vibe to its players. It is a high-winning frequency game with an RTP of 96.0%. Players can play Lucky Coin slot machine online on your mobile phone device or PC. The layout is user-friendly, and even new players will enjoy it without any struggle.