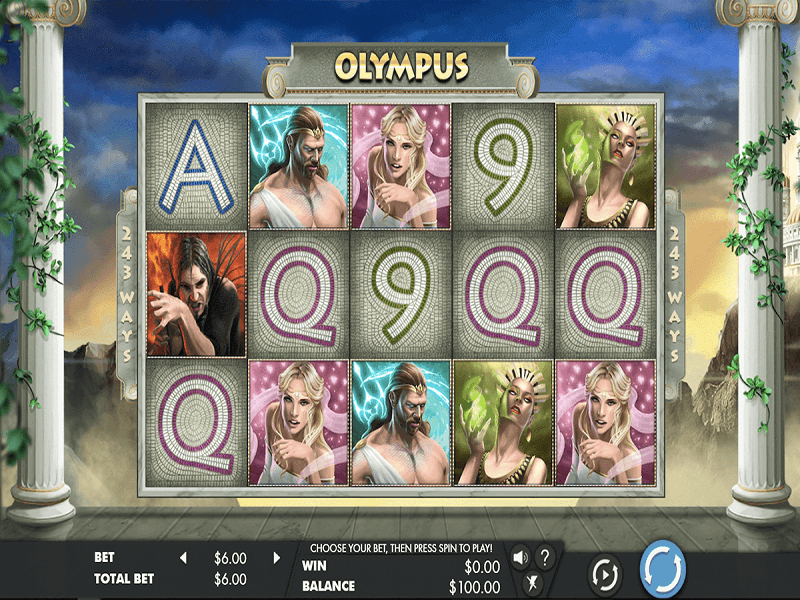 “Olympus” slot machine, released in June, 2017 by the Genesis Gaming provider, will give casino players great prospects to earn a big win, thanks to the use of a large number of additional features, led by a combined bonus. Usual payouts are calculated by the “Olympus” slot machine for the same matches in the direction of the line graphs that occur in the main game or free spins. The style of ancient Greek mythology is reflected in the interface of the “Olympus” slots and especially as regards the collection of symbols depicting portraits of gods and card denominations. This type of name serves as a part of winning combinations, while a special Scatter coin offers access to free spins.

Assessing their chances of winning the “Olympus” gaming machine, users of online casinos should take into account the different theoretical return values from 95.048% to 97.251%, which depend on the number of unlocked bonuses. Another component of positive results will be the choice of the optimal amount of monetary units, according to the level of volatility.

In “Olympus” slots game base symbols, scatters and jokers with advanced features, themed prize functions, free spins with bonuses and other options are available. Combinations are formed in 243 ways from several identical icons. Pictures should appear in any positions on adjacent reels, starting with the first column on the left. The scatters are operating in different way. Payments are calculated at the face value of the coins. It is multiplied by a factor from x3 to x500, allocated to the existing chain. Additional factors can also be used. With several winnings, credits are added together. The doubling round is not foreseen in “Olympus”.

“Olympus” slot is a game with five reels and fifteen positions for pictures on the main screen.

There are no active lines. The bet on the round is equal to the conditional thirty coins. Chips cost from one cent to two euros (0.30 – 60 euros per spin).

Most of the interesting features that “Olympus” provides, are opened when the participant has activated the bonus through the Scatter set. The actual version of the Free spins mode and the number of rounds depends on the chosen variety:

At the screen of the “Olympus” video slot appear heroes of ancient Greek myths and card denominations 9, 10, J, Q, K and A. Special symbols include:

Potential winnings in the table are listed in the single loan. On the right are the spin start buttons in automatic and manual modes. You can adjust the sound, the speed of the gameplay, the size of the screen and the parameters of the auto-game. You will play the “Olympus” machine in the browser. Mobile version is also available. The rules deal in great detail with all the nuances of bonuses, the basic provisions, the principles of the formation of combinations and the calculation of payments.

The Genesis Gaming Company once again demonstrated its skills in the production of ancient Greek slots, surprising the users with a new round of development of the popular thematic line and an extensive set of modifications. The “Olympus” by Genesis Gaming aims to ensure that every fan of such a story development can get aesthetic pleasure from the game, as well as please yourself with large payments earned in the usual or prize mode. To feel all the features of the slot in the graphic and prize plan, users need to start the real money game in any popular online casino, taking into account two main facts – high volatility and an excellent level of return.