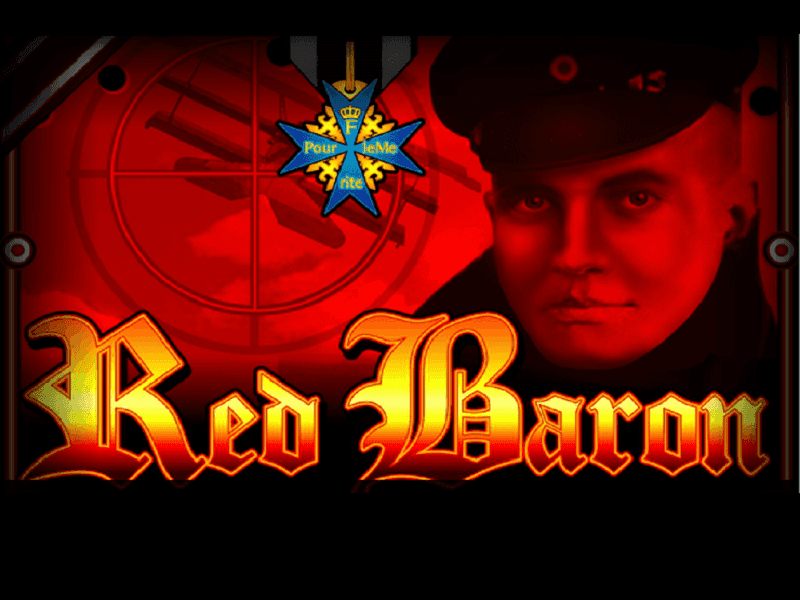 Aristocrat company has released many successful slot machines, known for their fascinating gameplay, bonuses and great graphics. Aristocrat specifically introduced to the public Red Baron for fans of military theme. In the slot machines of this manufacturer, new elements are used, and all the details are harmonized with the general topic. The main hero of this emulator is the pilot Manfred Albrecht known during the First World War as Red Baron. One of the most famous figures in the history of wars can bring gamblers a good winning. All action takes place in the cockpit. Trying the luck, players will see a many symbols that the First World War related. The slot is endowed with graphics for the latest technologies, an interesting gambling process and various bonus levels.

The game is based on the First World War. The background is blue skies, and scraps of clouds cover the drums on the left and right. The reels do not seem to have a stable construction, and they seem to be hovering in the air. Game characters are drawn very good, and because they are clearly visible among the clouds. The game has wonderful graphics, excellent musical design, great elements of special effects and thoughtful game story. Red Baron slots game has really good background — amazing blue skies with calm clouds.

This is five reeled simulator. There are no active lines, but 243 winning combinations, it is this number that is displayed from both sides of the extreme reels. Further under the drums is a string with tips on the gameplay. Aristocrat developers have placed a control panel at the very bottom of the screen that will allow casino players controlling the whole game process. The minimum nominal value of the coin is 0.01, and the maximum value is 5 for each drum. The maximum contribution is one hundred and twenty-five dollars. It is such a big bet that distinguishes the device from others. Jackpot available is 7500 credits. Users of Red Baron slot machine can achieve the maximum prize amount, which is equal to thirty-seven and a half thousand dollars.

There is an auto game to simplify the gameplay in Aristocrat’s slot. Set the number of spins obtained once by choosing a value from 5 to 500. The symbol with the image of the iron cross will start the free rotation with a gain ratio of 8.

In addition, to get 15 free spin it is possible to catch symbols with the target in Red Baron by Aristocrat on 2, 3 and 4 reels which can multiply. The risk game will open to the one who will collect any winning combination. The loan will have to guess the color of the card to double the winnings or find out the suit of the card if the user wants to increase it 4 times.

If to open free spins, the player can get up to 140 initial bets. As for the risk regime, if the gambler will guess the colors and suit of cards inverted, he can double the amount of the last win. The game is called risky because if its forecast turns out to be wrong, all the money earned in the last round will be lost. Unfortunately, Red Baron provides no modes of the bonus game and the progressive, but this does not affect the fun of the gameplay.

The symbols on drums are associated with the World War theme and include fighter jets, bombers and other elements corresponding to the theme when Red Baron was in power in the sky. Among the symbols, players of casinos will find airships, walkie-talkies, airplanes, targets and medals. Among other symbols, there are also traditional for gaming machines images that appear on drums with amazing sound effects and beautiful animation. Graphics and animation are very professional and give the game a very authentic experience.

This emulator can immerse each player in the tempting First World War atmosphere, and also will help to earn good money. This simulator was developed for those who are not afraid to take risks, and prefer to make large bets, for which they will receive big wins. Bonus levels attract their generosity, and the clear design of the device makes it even more attractive. Red Baron slot is a game that is suitable for players with different gaming experiences and a budget. It’s worth to check all the advantages of the slot by yourself, so do not waste time and start playing it right now.