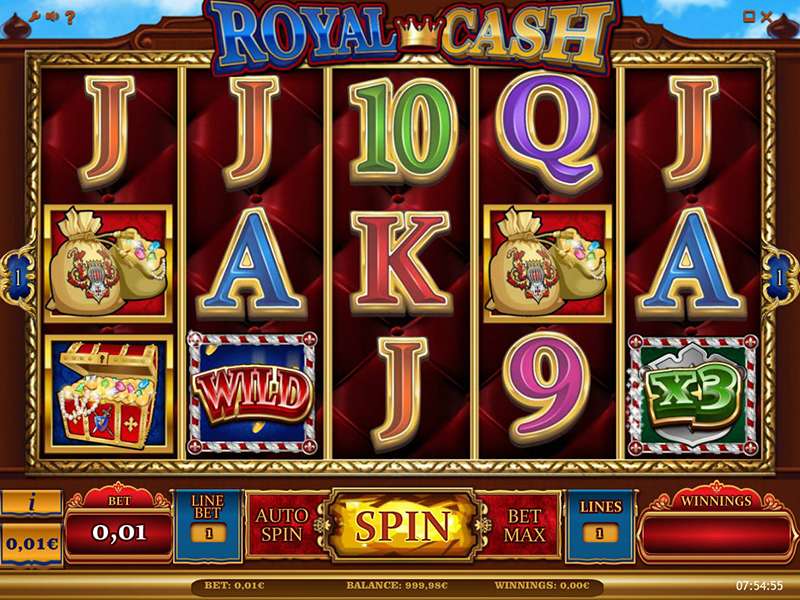 The opening of Royal Cash casino slot online shows a Queen and a King standing side by side. It would be fair to make a statement that the Queen is the better looking one of the two. Nevertheless, the King is the most significant and definitely the most valuable symbol in Royal Cash game. Royal Cash slot revolves around money. The following will contain what icons you can find in Royal Cash free:

The majority of the slot’s icons are either set upon a velvet background or a coat of arms. Graphically, Royal Cash looks solid; the animations are basic but good-looking. A significant number of symbols are the standard card numbers and letters from nine to ace. A regal soundtrack is playing in the background.

Also, what is important to mention is that this game is powered by the frontrunners of the software industry, iSoftbet. It has five reels and fifty paylines. Fifty play lines meaning there are fifty ways to win.

Keep reading our in-depth review to figure out why do players so often choose to play this slot machine which is in a significant number of worldwide casinos online!

The Royal Pair Will Make You Cash

Like in a vast majority of slots released by iSoftbet, here you will also encounter a game with five reels. Nevertheless, this slot has massive fifty win lines, which sets it quite apart from some. The number of win lines happens to be optional, so you will be in a position to play as many of the fifty as you would like. When you play, you will pick both the line bet amount (between one and ten) and the coin value.

Every time you land three or even more consecutive icons from left to right on a line, you will gain a win, with the most significant wins being reserved if you gain five in a row.

The King carries a 2000-coin payout, and the Queen is worth 1000 coins for 5 in a row. The gold bars/coins/crowns, the money bags, and the treasure chest pay out 150, 200 and 300 coins, respectively. The cards are the lowest when the value is considered. You are going to find an Autoplay option where the reels will spin without any interruption; they will only stop when you push the „stop auto spin button.”

There are 5 various wild symbols in the slot machine. Every one of them are single wilds, but along the one regular wild, you are going to find others with a 10x, 5x, 3x and 2x multiplier. Meaning that if you gain any one of your wins with one of those „multiplier wilds“ your win amount is going to be subject to that multiplier. The wilds will serve as a substitution for any other symbol except the free spins symbol. Landing five standard wilds in a row will give you 2000 coins as if you would land five Kings.

The title „Royal Cash” symbol happens to be the scatter icon of the iSoftbet installment, and if you land two or even more on consecutive reels, you are going to enter the free spins round.

The number of spins you are going to gain in the free spins feature depends on the number of scatter icons landed with an additional random element. If you land, two scatters you will get between ten to fifteen spins that are free moving all the way up to thirty-six to fifty free spins if you land five scatters. Every win in the duration of the free spins is going to be subject to the multiplier worth of the wild on reel five, either 10x, 5x, 3x or 2x. The feature can be somewhat tough to land because it might take a while, but with a significant number of free spins being available and also the added multiplier, it’s undoubtedly worth the wait.

When a gambling aficionado wants to play Royal Cash slot machine online, he has to know the right facts. The game has low to medium volatility and an RTP of 95.22% which justifies the always high standards of the giants of the e-market, iSoftbet. No mention of cheats, abide by the rules, smartly use the tips we ensured you with in order to make a strategy that will get you many winning combinations and jackpots.

The Queen and the King Won’t Disappoint You

Try to land either five Kings in a row or to land exactly five wilds which will result in the same reward which is really fantastic. Also, try to win five scatters because they can get you between 36 and 50 free spins.

The most substantial amount of coins that can be won is 100000.

You Can Do It!

This slot surely made an impact in the always-crowded online slot industry, with its breathtaking features, bonus features, free spins and so on. Simply, a very entertaining iSoftbet installment! Go out there and play Royal Cash for real money!