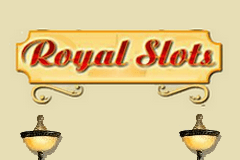 Royal Slots is an innovative game from NeoGames. The innovativeness of this classic arcade title stems from the fact that you can play three games at once. How? That’s the question on many gamer’s lips right now.

Well, it’s really quite simple, the game comes with three slot machines placed on the wider screen. These small slot machines spin simultaneously if you opt to play all of them at once.

You also have the opportunity to play across two small machines, or if you are the traditional type, you can always opt for the standard one machine. To play with one or two machines, just click on the machine/s you want to deselect.

All three machines come with three reels and one pay line. The return to player percentage of the game stands at 96.00 per cent.

The Inspiration behind the Title

Away from the innovativeness of the game, some may be asking why the title, Royal Slots. Well, royal in this instance stems from the background graphics that come with this game.

This slot is set against a backdrop of a classy and refined boudoir acting as the background. One can only assume that this boudoir is inside the King’s palace hence the title of the game.

To learn more about this slot, you need to continue reading this review which features game playing as well as game-winning tips and strategy.

Regardless of where you are located, you can enjoy the Royal Slots game, i.e. whether you are in Europe, Africa, Asia, America or Australia. Another important thing to note is that this game is accessible only at genuine casinos online meaning that cheats will not have their way.

The Two Ways of Playing

There are two ways in which players can play this game. First of all, there is the demo mode which allows gamers to play for free using the free credits that they receive.

Secondly, there is the real money mode which allows gamers to play for real money using their own funds. Below, we highlight more on this.

The demo mode allows gamers to play Royal Slots free hence for fun. When gamers opt to play for fun, they can do so in either one of two ways.

The first way is pretty straightforward, i.e. proceeding straight to hit the Spin button after loading the game. When gamers opt for this, they just play with the default settings. However, gamers can also opt to tweak some things on the Control Panel before hitting the Spin button.

Some of the things that gamers can tweak when playing in demo mode include the AutoPlay button. This button gives the players the freedom to spin the reels for a set number of times uninterrupted.

This is great for players who are multitasking as they can do other things while at the same time trying their luck. Secondly, players can also choose the number of machines they want to play with.

Players are free to play with either one, two or all three machines. By simply touching the machine, players can either select or deselect the machine they want.

As is the case with players playing for fun, players playing Royal Slots for real money do have the powers to tweak a few things on the Control Panel including those discussed above, i.e. turning on or off the AutoPlay button and selecting or deselecting the machines they want to play with.

Gamers playing especially for real money need to note that any malfunction during gameplay voids all plays and also all pays.

The Features in this Game

There is no wild icon when playing Royal Slots slot machine online as far as no scatter icon and also no bonus symbol.

There is a jackpot in the Royal Slots casino slot online which rises up to 200 000 coins. This bonus can be hit at random.

This NeoGames slot is a classic game with a difference as it allows gamers to enjoy three games all at the same time using the same wager. The Royal Slots can be played on the desktop or on mobile devices.