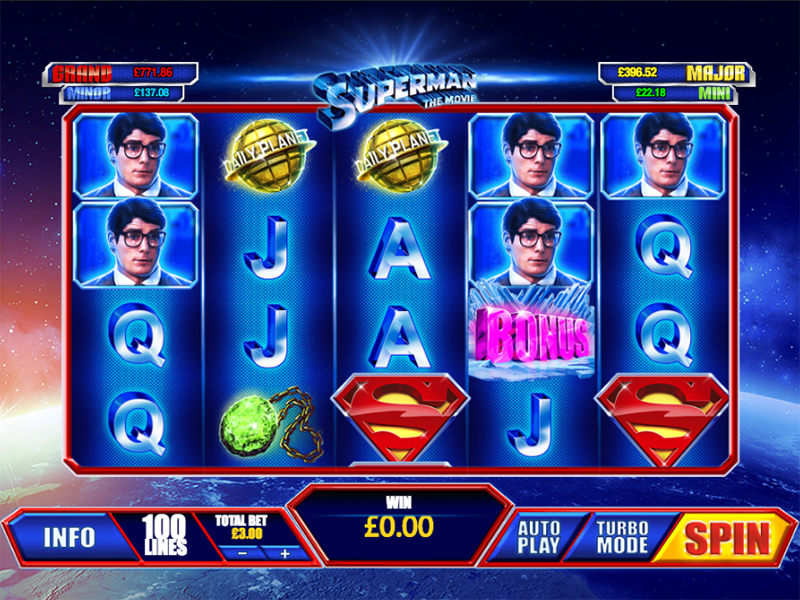 The ’70s are remembered for many things, from questionable mustaches to flared trousers, but one of the major aspects we remember is Superman. During that decade the movie was released where Christopher Reeve starred. Till this day it is still very much popular. So, it can’t surprise you that the giants of the gaming business, Playtech decided to create a slot game based on this incredible movie.

Playtech has released quite many slot machines that are based upon DC Comics and Marvel, resulting in a massive influx of superhero activities. Superman: the Movie is among the most significant games that they have released when popularity in casinos online is considered.

Superman: The Movie casino slot online has five reels, four rows and one hundred paylines which are fixed. One hundred play lines meaning there are exactly one hundred ways to win. The icons spin on colorful red and blue reels, behind them, is a view of the Earth. Original soundtrack from the movie accompanies your gameplay.

The symbols with a higher value in Superman: The Movie free are the following:

Standard playing cards which you can find in a deck are the icons with lower worth ( J, Q, K, and A).

Read our in-depth review and get more info about Superman: The Movie slot and see why do players choose to play it!

If you played Playtech slots before, you’d be familiar with this information, but there are a lot of gambling enthusiasts who didn’t play games from this software provider. You see, the brand includes some progressive payouts in a majority of their DC Comics slot machines, which is why there is an incredible DC Comics Jackpot across every last one of the titles.

There are precisely four levels in Superman: The Movie: Grand, Major, Minor, and Mini- each of them delivers various payouts. Nevertheless, what you may not be aware of is the fact that it is mandatory to play the mini-game so you can get the jackpots. The mini-level is triggered randomly, but once you are inside of it, gambling enthusiasts have to match 3 of the same colored tiles if they want to win the amount which is attributed to that particular level of money. The minimum, bet for everyone is 0.60. Meanwhile, the max is 80.00.

Next in line are the bonus features. Save The Day Free Games Feature. This bonus is more impressive than your common rewards. When a player lands an extra spin symbol on the fifth, third or the first reels, you will enter into a round of ten free spins, where the Superman logo happens to stick in place. It will stay there for all ten games.

After those games, Superman appears and also rewinds time so you can relive the fun again,  with those identical symbols locked in place. This will mean that you have the possibility to end up with twenty games, and all of them should produce some awe-inspiring results.

Also, there’s a Crystal Bonus feature in Superman: The Movie game. You can trigger it if you land three of the pink „Bonus” icons basically anywhere on reels four, three and two. You are going to be taken to a playing screen which displays 14 crystals, and you have to choose them to reveal various prizes until you manage to find the green one which will end the round. Rewards include multipliers, a clue, and restarts to where exactly is the green crystal so you can get a chance to avoid it.

Of course, like in a majority of slots, this one also has an Autospin feature where the game’s reels will spin as long as you let them to, and you can stop them with a push of a button. No cheats are mentioned in the game; you have to be a good player and follow the rules and use smartly the tips we ensured you with so you can create a strategy that will give you many winning combinations and eventually some jackpots. When a gambling admirer wants to play Superman: The Movie slot machine online he has to get familiar with the fact that it has medium volatility and a 95% RTP which is well above the average standards of one of the frontrunners of the e-market- Playtech.

Try to succeed in landing a minimum three of those pink bonus symbols so you can be taken to a playing screen which will display to you fourteen crystals and you can select them to unlock some very nice prizes.

The maximum amount of coins someone can win happens to be 225000.

This slot machine is always going to be great because it is based on an incredible superhero, who’s an all-time classic. Be a high-roller, and try to see how the fortune serves you when you play Superman: The Movie for real money!