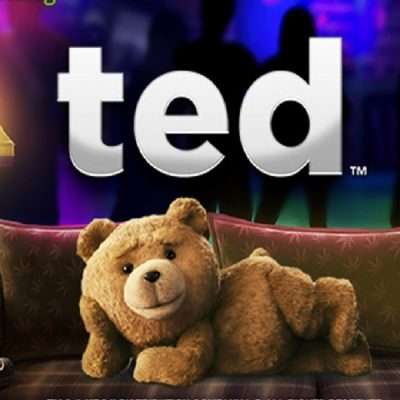 Ted Slot by blueprint-gaming has a movie theme that is inspired by the famous 2012 comedy movie that bears a similar title. The game allows you to follow and participate in the adventures of TED. The talking teddy bear’s cruel jokes will keep you entertained and thus make your gameplay more enjoyable spin after spin.

Ted Slot features five reels and 20 play lines. The video console has a lot of offers in terms of gameplay. It has a good number of unique symbols and fun features with big wins at stake — most of the scenes and details are drawn from the 2012 film.

Ted game takes you straight to John’s basement with the view of a sofa where Ted spends his days smoking a bong, swilling beer and watching Law and Order. Just below the reels, TED the teddy bear is seen just below the reels taking a nap lying next to him are empty cans of beer. When he wakes up be sure of winning some “Pawsome” or “fur-kin sweet” jackpots.

How to Play Ted Slot

The Advanced Autoplay settings allows you to determine when the auto spins should stop. The Autoplay function will be disabled anytime you win a jackpot.

Getting to Know Ted Before the Adventures

The info icon, located at the left bottom of the game window, takes the player to the payout table. The paytable contains several characters and items taken from the movie.

The icon with the image of Ted with the word “Wild” is the wild symbol. This symbol can land you big wins whenever it substitutes other symbols, except for the scatter, to complete a winning combination.

The supper stacked Ted logo symbols has the highest payout among the character symbols with 500 credits for 5 of a kind symbol combination.

Other high-value symbols include:

A, K, Q, J are the low-value symbols in the Ted Slot pay table which has a maximum pay of 100 for landing 5 of a kind of the Ace symbols on an active payline. The Ted logo and Wild are the only symbols in the game that pays to start from as low as two symbol matches.

Exploring the Adventures of a Talking Teddy Bear

Ted casino slot online features six modifiers: Lazer Gun infectious wilds, Psychedelic super spin, Beer shuffle, Psychedelic colossal spin, TV streak, and psychedelic bonus boost. You can win one of these modifiers when Ted wakes up from his hangover. The modifiers offer big wins, but this is just a tip of the iceberg.

The bonus round is a stage like mini-game, where you will be moving up the ladder to win one of the five bonuses, Wheel of Fortune, Bar Crawl Bonus, S-mart Free spins, Ted Free spins, and the Ted Big Money Bonus in accordance to their value. Press anywhere on the screen to spins the reel as you move your way up the ladder.

You can choose to collect or gamble the feature for much higher feature, the features of less value are crossed out of the risk options. If you land on a Mystery Win, you get a random award and you are taken back to the base game.

Each bonus round represents a particular scene from Ted, which has unique rules and gameplay tips.  To win super cash prizes, bonus multipliers, extra free spins you need to follow the simple instructions that appear on the playing screen.

Can’t Get Enough of the Vulgar Shock Humour

Ted Slot is one of the most enjoyable and entertaining slot machines in the industry. The 3D design of the game offers a modern slot look with quality graphics and animations. The slot machine will appeal to fans of the movie and gamblers who appreciates the humour.

Ted Slot has an RTP rate of 95.805% which makes it an average paying game, but what stands out is the unique gameplay it offers for all levels of rollers. It is considered as a low volatility game since players can score many small prizes in a row.

Ted free play mode allows the player to familiarize with the game strategy. You can also choose to play Ted for real money in any casinos online powered by blueprint-gaming.