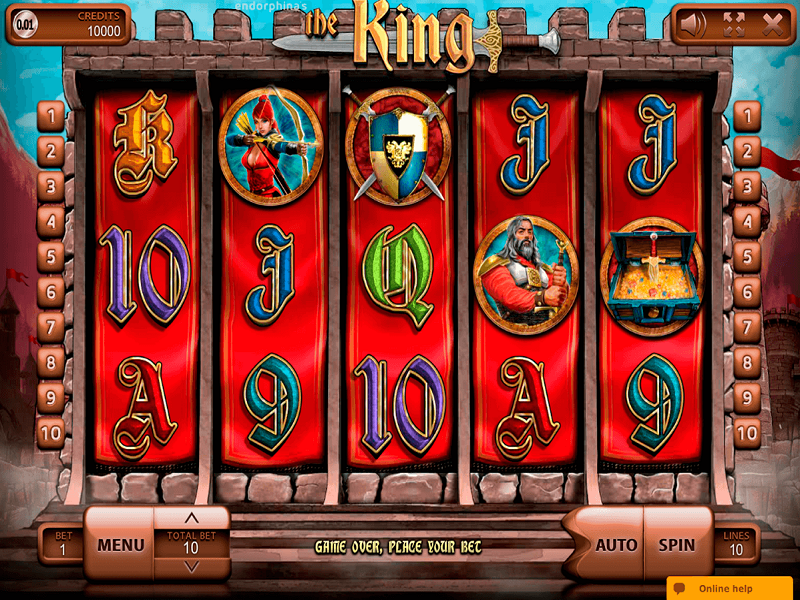 Looking for something Games of Thrones related but a little bit more peaceful and not so bloodshed-filled? Then a must-play slot machine called The King by Endorphina will be fitting right in your session as this wonderful game takes casino players into a medieval period without featuring too explicit scenes of head ripping – everything is just romantically regal and as tranquil as possible. The King slots game, though, is not the last attempt at embracing the theme of monarchy – there are numerous video machines of knightly narratives blustering at online casinos, but The King seems to bring in more special moments compared to the rest.

In the first place, Endorphina seriously considered the associated aesthetics and tried to depict realistic details in every corner of The King slot machine. The overall design goes into creative ways, yet at the same time remains close to authenticity: the reels are embedded into an adorned castle wall with flags waving in the wind along the sides, the mountainous background shows the further way to the castle spanning across the hazy land and the red-painted foreground creates a jazzy contrast with the scenery behind. Endorphina evidently spent much time thinking over this visual kaleidoscope to come up with such a bright backdrop where reels complement, not dominate, so gamblers are met by a colourful lineup right from the beginning. But these are far not the only virtues The King has.

Stepping closer to the gameplay, one has to admit that there’s much more to The King than a beautiful picture: Endorphina also paid great attention to gaming features, so The King gets even more spectacular. Players will discover incredibly valuable Wildcards paying off x9000 to anyone collecting a five-of-a-kind, Scatters to pick and a gambling game with doubling bets up to ten times. This is quite a classic package nonetheless, even traditional, regarding that all specialty symbols perform their original functions. But this does not make The King slots commonplace.

Running for the crown – Wild symbols are going to be your best friends during the base game as they are additionally powered with three features that might help significantly amplify good wins. To begin with, Wildcards in The King have a prior mission to substitute for any regular symbol to boost combinations. Next on, Wilds produce large rewarding for combinations of their own – even a string of two Wilds gives x10. Finally, replacers double wins when substituting. So any time a couple of Wilds are coming, gamblers can surely expect something tasty.

A fierce lion to defend – another just as profitable as Wildcards symbols are Scatters which provide a series of free games with multipliers within. What’s more, Scatters are the second most profitable in terms of payouts icons on the reels (after Wilds, of course), so it is amazing to witness your credit bank getting increased by x50 or x5000 for a Scatter combo.

Risking it all – in case your last win does not look impressive enough to be taken, The King provides a great chance to partake in Risk Game and win something more appealing. Basically, Risk Game more or less resembles a simple version on Blackjack with a single card where gamblers’ objective is to beat the invisible dealer. You might result with 10 doubling in a row since odds here are relatively high.

The King slot is a game of a small number of bonus opportunities, but this number will be quite enough to drag real money out of the machine. Aside from extra wins by Wildcards throughout the main game, gamblers can catch Scatters and trigger freespins or take risks at the gambling game after any successful round – whatever floats your boat. The following table gathers rule sets on each.

You do not have to be a lavishing royalty to bet in The King – stakes here involve really moderate bet levels and an average number of win-lines. There are just 10 paylines in the game, and they can be easily fixed. Bets start at a single credit to go and can be raised up to 100 credits per hit with all 10 lines included. However, there are different denominations, so you can go with 0.01 credits per round.

The paytable contains six card characters with low-win values, two specialties – Scatter and Wild, and also five mid-win pictures. The major feature in The King is Free Games, but additionally gamblers are served with Risk Game during the base spinning. The machine counts combinations in a classic manner – from left to right.

While being somewhat straightforward in a few gaming elements, The King still offers an exuberant journey through a luring medieval land where incredible riches dwell. There’s only one real flaw to The King – this machine is a little bit too greedy with bonuses and features if one compares it to medieval competitors. But this will not be much of a problem for gamblers as The King grabs attention by different things.