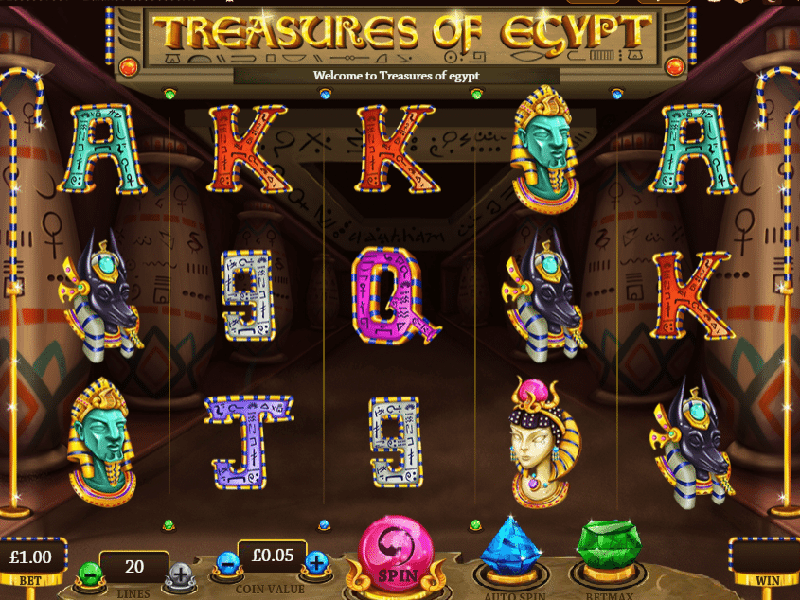 The title of this Cozy Games powered slot does not hide the theme of the game at all. From the title, we learn that this slot game is an ancient Egyptian themed slot. The slot will help the player to time travel to ancient Egypt where he will assume the role of the Pharaoh.

As such, the player will be able to enter all the sacred enclosures including the pyramids where some of the dead Pharaohs were laid to rest.

In the process, the player will be able to ‘take’ any precious artefacts that he comes across (as we all know that in the past, Pharaohs were buried with all of their most prized possessions!).

If you want to time travel to ancient Egypt and gather all the precious artefacts for your own benefit, all you simply have to do is to set in motion the game’s five reels that come with 20 paylines.

The wild symbol when playing Treasures of Egypt game is represented by the Isis. As the wild card, the Isis does substitute for all other icons on the reels with the exception of the scatter.

In addition, the Isis whenever it substitutes for another symbol and helps complete a winning combination, it will double the win.

The scatter symbol is represented by the pyramid symbol when playing Treasures of Egypt slot machine online. This online slot machine does not have a bonus symbol.

Treasures of Egypt slot game comes in two modes. The first mode is the demo mode which is basically free play.

This, therefore, means that players simply spin the reels of Treasures of Egypt free without worrying about the wagering information. This is made possible by the free credits afforded to all players by the game developer, Cozy Games.

Apart from the demo mode, players can also play Treasures of Egypt for real money. The real money mode requires gamers to use their own funds in wagering. The minimum bet amount set is 0.01 coins per line.

The maximum bet amount in this game is 20 coins per line. From this wagering information, players can note that Treasures of Egypt suits low rollers as well as high rollers.

The Free Spins Feature in Treasures of Egypt casino slot online is the main bonus feature in this online slot machine. To trigger this feature, players have to land at least three scatter symbols on the reels.

In return, the player is awarded 15 free spins. It is possible for the player to retrigger the free spins, all the player has to do is to land three or more of the pyramid scatter symbols.

Treasures of Egypt is a medium variance slot game. The RTP of this slot game stands at 92.72 per cent. The game is mobile friendly meaning that players are able to play it on their mobile devices.