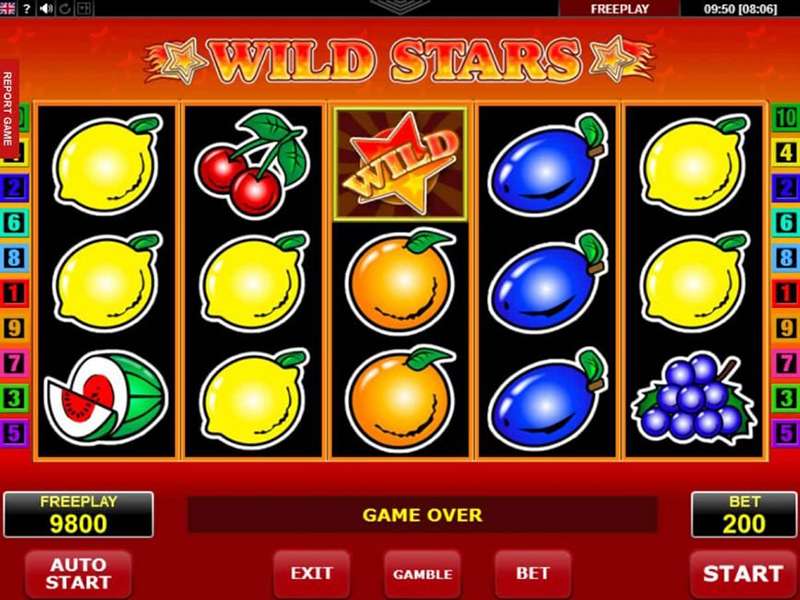 Wild Stars is an Amatic powered slot machine which takes players down memory lane (for those who have been in the gaming industry for some time) as it comes with a fruit theme.

If you are a beginner in the ‘slots world’, you can also expect to have a taste of the true classic ‘fruit machine’ when spinning the game’s five reels. Wild Stars comes with 10 paylines.

As a fruit themed slot, players can expect to encounter some juicy fruits on the reels. Juicy fruits that players will see on the reels include plums, grapes, melons, oranges, lemons and cherries. Apart from the fruit symbols, Amatic also threw lucky sevens into the mix.

The wild symbol when playing Wild Stars slot machine online is represented by the wild stars themselves. As the wild card, the wild stars do have the magical powers which enable them to substitute for any other symbol on the reels.

Often times, this happens when the wild stars want to complete a winning combination. As is to be seen below, the wild stars are also key in triggering the game’s main bonus feature.

In staying true to the nature of classic fruit themed slot machines, this online slot machine does not come with a scatter symbol. Wild Stars slot game does not have a bonus symbol.

In order to allow all players to have a taste of a ‘classic’ gaming experience, Amatic did release this slot game in two modes.

First, this pokie comes in the demo mode which allows players to try out Wild Stars slot free. This is made possible by the free credits which are afforded to players by the game developer.

However, fully knowing that there are other players out there who simply do not like spinning the reels of a slot game for fun only, Amatic also released this slot in the real money mode.

In the real money mode, players are able to earn some profits from their spinning adventure. This is necessitated by the fact that gamers are required to wager their own real money hence in turn, they stand to in real money. The minimum bet amount required to start spinning the reels and playing Wild Stars for real money is 10 coins per spin.

The maximum bet amount in this game is 1000 coins per spin. As such, one can note that Wild Stars casino slot online is a game which does not discriminate according to the player’s bankroll, either with a high bankroll or with a low bankroll, players can enjoy the slot.

The main bonus round in this online slot machine is the Re-spin Feature. The Re-spin Feature is activated when the player lands three wild symbols simultaneously. The player is awarded one re-spin. Re-spins cannot be retriggered.

In order to give players something incredible to look forward to other than base game wins, Amatic incorporated the Gamble Feature. The Gamble Feature is a feature which allows players to either double or quadruple their winnings.

As the feature is all about doubling/quadrupling winnings, it, therefore, means that players can only activate this feature after they land a winning combination. In order to double one’s winnings, the player has to guess which card colour is going to come out next.

In order to quadruple one’s winnings, the player has to guess which card suit is going to come out next. One thing to note with this feature is that a wrong guess will see the player forfeit his previous win.

Wild Stars game is a medium variance slot. The RTP of this game stands at 96 per cent. The game is mobile compatible meaning that players can enjoy the game on their mobile devices provided they run on Android or iOS operating systems.